In late March, with little to no public attention, the Trump administration’s Department of Health and Human Services proposed new regulations that would undo a major component of Obama-era rules that improved quality in Head Start programs. As I argue in a new piece at The Hill today, this is a bad idea:

A few weeks ago, as President Trump tweeted attacks on “failed” media coverage of the Russia investigation, his administration quietly proposed new regulations that would undermine learning for low-income preschoolers…The Trump administration claims its proposal would give programs flexibility to meet local needs, and prevent reductions in Head Start slots. Both these explanations are incorrect.

A little bit of background: As most readers of this blog know, Head Start is a federally funded comprehensive child development and early learning program that serves about 1 million children and their families annually. In 2016, the Obama administration adopted new regulations designed to improve quality in Head Start programs and shift the program from a focus on compliance to how grantees are serving children and families. As we wrote at the time, these changes represented significant progress for both Head Start children and grantees. 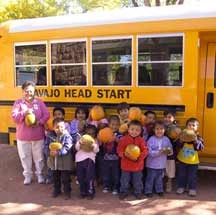 One of the biggest, and definitely the most controversial, of these changes was an increase in the minimum duration of Head Start programs. Prior to the regulation, Head Start preschool programs had to be at least 3.5 hours in length and serve children at least 128 days a year. Under the new rule, programs must be at least 6 hours and operate a full 180-day school year. Research shows that children who attend full-day preschool programs learn more than children who attend part-day. In recent research Ashley LiBetti and I conducted on Head Start programs that produce strong learning gains for children, we confirmed this finding: A common factor among the programs we studied was that they offered school-day-length programs.

Moreover, lengthening the Head Start day from partial to full day reflects the reality that family structures and mothers’ participation in the workforce have changed since the program was created in the 1960s. Today, most mothers work outside the home, and part-day pre-K doesn’t work for many working families. By providing full school-day care that helps parents work, Head Start can also advance its mission of helping families move out of poverty.

Obviously, lengthening the Head Start day has a cost, and the regulation allows the Secretary of Health and Human services to delay implementation of the longer day requirement if Congress does not appropriate sufficient funding to cover that cost. Moreover, the existing rule gives flexibility to programs who believe a part-day program would best meet the needs of their community: these programs can request waivers for partial-day programs.

Because of this, as I argue at the Hill, there’s no reason for the Trump administration to undo the longer day requirement. Moreover, undoing the requirement may make it harder for Head Start programs that do want to lengthen their day, whether to improve children’s learning or help families work. The Obama-era regulation essentially made a full day the default, while preserving flexibility for programs whose communities have different needs. In other words, the existing rule puts the onus on programs that want shorter days to show why this meets their community needs, rather than, as previously, on programs that want to offer longer days. The administration’s proposed changes would flip that backwards, again making part-day programs the default.

Having part-day programs as the standard for the nation’s largest preschool program makes no sense given the realities of today’s families, the research on early learning, and the needs of children that Head Start serves.

The good news is that the administration’s proposed rule would not undo other important changes made in 2016 to the Head Start regulations, including new requirements to better support professional development and coaching for Head Start teachers, strengthen curricula, improve supports for dual language learners, and integrate data-informed continuous improvement in Head Start programs.

The other good news here is that the administration’s new proposed rule is just that: a proposal. Interested stakeholders and other members of the public have the opportunity to share their perspectives through public comment on the proposed rule. When the rule was last revised in 2016, public comment influenced changes to a variety of provisions that, in many cases, made the rule better.